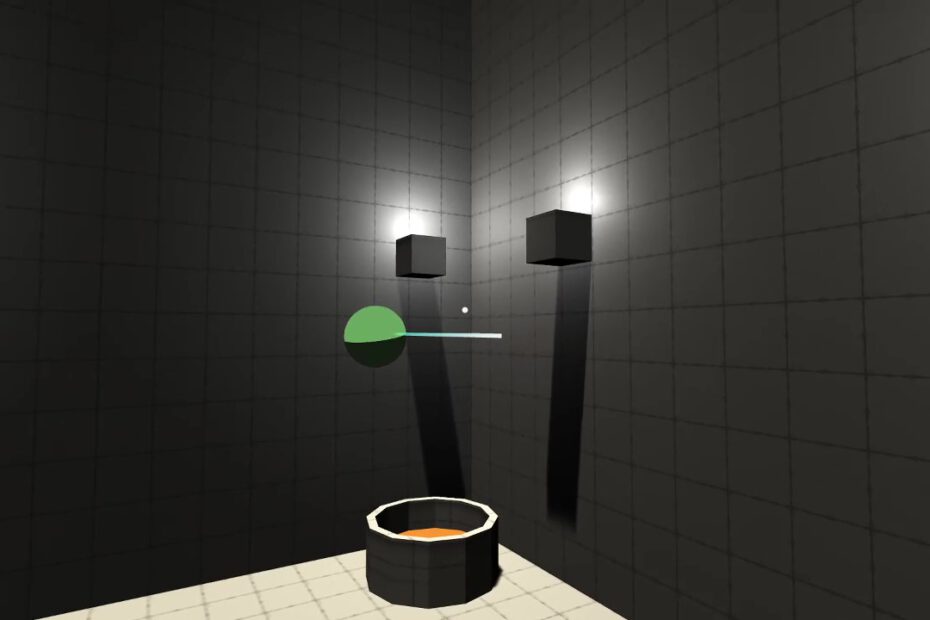 In the beginning of 2020 I started playing Portal. This was actually my first time with Portal and although this was quite an old game, I was really stunned by the greatness of this game. The premise to have a relatively simple but interesting physics mechanic and to create a game around this very special mechanic really fascinated me. So as I am always curios about my own abilities, I wanted to make this kind of game for myself. I wanted to create a game in which physics are very important and give the player a feeling of a very realistic and interactable environment. So I started a new Unity project, sat up a basic player movement and tried out some ideas, mechanics and ways of interactions. After I settled with a fun mechanic I figured out the kind of game to build around this kind of mechanic.

The First Attempts and Iterations

My first attempt was to make a shooter. I just wanted to be able to shoot in the game and to destroy or push objects around by shooting them. I thought about a game where you have to start some physical reactions, kind of like these marble machines some people built on the internet, by shooting at the right piece and cause it to fall down. Some kind of physical-based chain reactions could have been fun to look at. After I implemented the shooting and shot some balls and cubes in the scene I thought „This is fun but I would love to move the physical objects around without the shooting. Shooting is fun but too ordinary“. I wanted to be able to carry and hold things.

After implementing the ability to pick stuff up by clicking on it, I realized that this also didn’t feel very special. I was able to pick a thing and it kind of „popped“ into the according space in the players view. It did not feel very realistic or like some kind of real interaction. Then I thought: „What if I pick things up, by adding a physical force toward the center of the players view. Like physically lifting things through a force I create.“ (The fact that I always loved Star Wars helped me with this idea…)

So I implemented that feature and it was really fun. In the whole project this was the first mechanic I enjoyed playing around with. The object the player picks up kind of swings around the center of the view and can be speeded up by looking around. The higher an objects mass were, the more sluggish it moved. This felt realistic in a way. Just by picking things up and moving them around I became a feeling for how heavy things are. A big wooden table were much heavier than a small can in the scene. So I decided to stick with this dragging mechanic for now.

The Game Around The Mechanic

After figuring out a fun and from my point of view interesting way of interacting with the scene, I tried to figure out a game I want to build around it. At first, I thought about using the mechanic in fights. To through objects at enemies and to create a very action-loaded battle simulation was one Idea I had. But after some test I realized, the swinging and dragging were too unpredictable to really aim at something. Then I reminded myself of my initial inspiration to start this project. I played portal and besides the great story and atmosphere, I really dug the puzzles around the innovative mechanic of creating a portal. So I thought, maybe this is a good way to start. Giving the player the need to use the mechanic I created and exploring its possibilities. So I decided to create a puzzle platformer in which the player has to solve puzzles by using his environment to make progress in the game. This is not a top-notch gameplay innovation but It is good to learn something and the size of the project is not to big for one person.

Currently, I would say, I reached the first milestone. I implemented the swinging mechanic and visualized it by drawing a colored line between the object and the center. I also polished the basic movement and the mechanic so it is fun to use and there are no glitches anymore. I also implemented a first, very simple puzzle. (If you plan on playing the first prototype and trying to solve the first puzzle yourself, you should first download the game here and try it before you continue reading.)

In the first room, there is a pit of lava and some kind of pool filled with balls. There also are a door and a button beneath the door. Here is what I want to happen: The player is supposed to explore the room. The game only tells him, he can click and hold on objects nearby and drag them around. After that, the player is supposed to take the balls, swing them around and finally got to the door. There I want him to try use the button. (actually at this point the button is designed very poor. Using it with the dragging mechanic is very unintuitive and a want to change it to some kind of tilt switch). The button won’t work, because the puzzle still needs to be solved. Next I want the player to look again at the balls and start throwing them into the lava. He will recognize the balls disappear. But: One of the balls is red – the same color as the door button. The player has to destroy the red ball first and then use the button. After the ball is destroyed, the door can be opened.

Current Issues and next steps

As I already mentioned: There are still some issues. Some are just bugs or programming issues, others are design related. Here you find a list of them along with my ideas for fixes and the next steps I plan after that:

The scope of the project is relatively big for one person. So it will take a while to finish the game. I have to treat it as a side project, but I will use this article to track my progress and give you some updates once I reached some milestones.

We use cookies on our website to give you the most relevant experience by remembering your preferences and repeat visits. By clicking “Accept”, you consent to the use of ALL the cookies.
Cookie settingsACCEPT
Manage consent

This website uses cookies to improve your experience while you navigate through the website. Out of these, the cookies that are categorized as necessary are stored on your browser as they are essential for the working of basic functionalities of the website. We also use third-party cookies that help us analyze and understand how you use this website. These cookies will be stored in your browser only with your consent. You also have the option to opt-out of these cookies. But opting out of some of these cookies may affect your browsing experience.
Necessary immer aktiv

Any cookies that may not be particularly necessary for the website to function and is used specifically to collect user personal data via analytics, ads, other embedded contents are termed as non-necessary cookies. It is mandatory to procure user consent prior to running these cookies on your website.